by Out Of Context 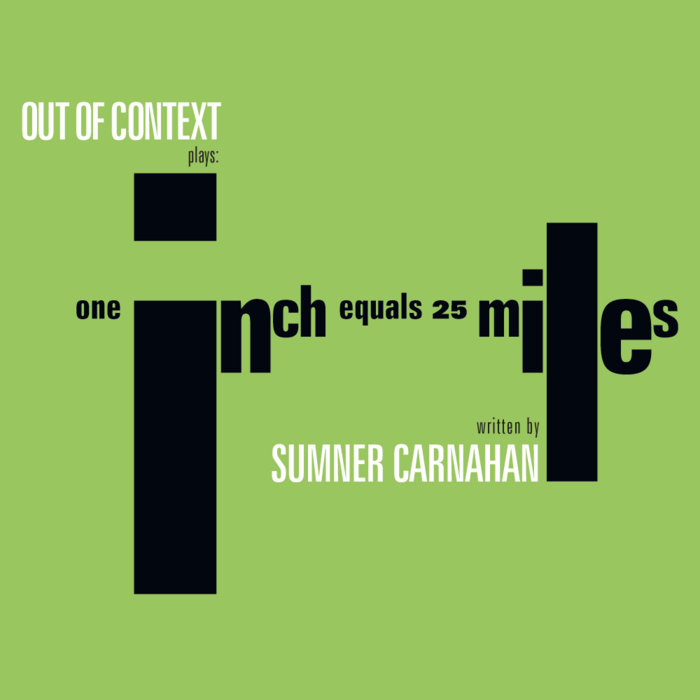 Writer Sumner Carnahan has worked with composers and performers for twenty years to present her stories off the page. Musician/composer J.A. Deane formed the Out of Context ensemble to explore conducted improvisation. This urgently weird CD comes out of a live recording to OOC playing Carnahan's latest story collection, One Inch Equals 25 Miles.


"Not to mix Metaphors, but...There's a song by the visionary art-rock band pere Ubu, (it's ultimately a "relationship" song) that begins with the following; "In the earliest part of the 20th century, deep inside the American Wilderness, in the State of Kansas - 82,000 square miles of flat - there were two automobile cars. On July 5th, 1904, they ran into each other."

Seen from the perspective of late spring 2005, the two-years-in -the-making collaboration between writer Sumner Carnahan and musician/composer J.A.Deane that has resulted in the deeply affecting and mysterious work you are about to listen to appears every bit as astounding and unavoidable as the collision described by Ubu lyricist David Thomas. As artists, both Carnahan and Deane long ago veered off the commercially-approved "major highways" of their chosen forms, journeying instead with relish across the rutted, perilous, and deliriously invigorating backroads of the avant-garde.

The shortest distance from one point to another may be a straight line, but in the land of One Inch Equals 25 Miles strict linearity is never an option. Like the bus driver, Rio, who acts as our guide withing the pages of Carnahans book (the name means "river") Deane steers his Out of Context ensemble along a meandering, winding path full of twists, turns, and sudden surprises. As has been delineated elsewhere, Deane's method of "conduction" involves a series of gestures that control performance elements such as loud-or-soft, who solos and who remains silent, changes in pulse and the like. But the notes themselves are always left to the individual players. Even the occasionally recurring thematic leitmotifs are created in the moment and only resurface later when and if Deane displays the so called "memory" signal.

Technical explanations, however, easily confuse the issue. The best advice one can offer the initiate is to simply sit back, relax and enjoy the ride. Listen, for example, to the way the piece "Again" begins with a sound that approximates an idling engine, or how the hum of words wells up once the OOC machine starts, fitfully, to accelerate. A woman's voice tells us something how "movement in the physical world" happens, and voila, just like Chuck Berry's mythical Airmobile in the song, "You Can't Catch Me," we've magically become air-borne.

There are other signposts and sights along the way, too many to list here. The plaintive melody on oud that propels the section entitled "Profile"; the mournful bassoon cadenza at the outer reaches of "Distance"; the undulating uniflute theme (played by Deane himself in his guest appearance) that forms the core of the penultimate "Transmission"; and the monolithic " Eight Hundred Thousand Bomb Shelter," which brings the piece to a roiling close. This final track consists of every word contained in Carnahan's book, squeezed into a melifuously layered, post-nuclear, Joycean cacophony cobbled together from thirty-eight recordings of individual readers and a motley Tragic Greek Chorus. Like the mantra, OM, the resulting buzz contains an entire universe, humming along its sad and beautiful trajectory."

ALL COMPOSITIONS: J.A.Deane and OOC, except track eleven by J.A> Deane and C.K.Barlos(BMI)

High Mayhem Emerging Arts has been an oasis for creativity in the desert of the Southwest since 2001.

This record label documents the artists that make up High Mayhem in addition to representing the touring artists we've hosted through our numerous festivals, series, shows, and pirate video broadcasts.

An under-represented scene of diverse talent thrives in the high desert. Welcome. ... more

Bandcamp Daily  your guide to the world of Bandcamp

Cannibal Corpse's George "Corpsegrinder" Fisher stops by for an interview